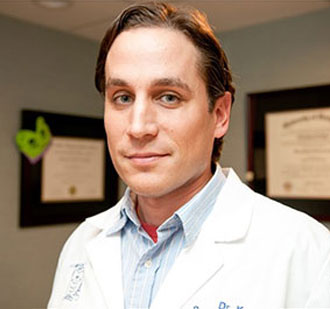 Dr. Kourtsounis or “Dr. K” is a pediatric dentist originally from Long Island. He received his Bachelor of Science Degree in Biology from the State University of New York at Stony Brook in 1998. After graduation, he returned to Maryland where his family had moved and was accepted into the top ranked University of Maryland, Baltimore College of Dental Surgery where he received his Doctorate of Dental Surgery in 2003.

Upon graduation, Dr. Kourtsounis moved up to New York City and completed a General Practice Residency at the St. Luke’s/ Roosevelt Hospital Center. He served as chief his one year there.

After completion of his GPR, Dr. Kourtsounis worked in private practice for two years in both Manhattan and Brooklyn, focusing on pediatric dentistry.

In 2006, Dr. Kourtsounis was accepted into the pediatric dentistry specialty at the Mount Sinai Medical Center in New York City. He served as chief resident and helped author various publications, which appeared in local and nationwide dental journals.

Dr. Kourtsounis has continued to stay on at Mount Sinai as an attending faculty and has dedicated his free time to teaching at the residency and performing dental rehabilitation cases in the operating room under general anesthesia.

He is very active in the community and volunteers regularly, giving seminars to various pre-schools in the area on dental prevention, hygiene, and diet.

Dr. Kourtsounis and his wife have a six-year-old son who is also very interested in becoming a dentist like his dad. He is a diehard Chicago Blackhawks and NHL fan, and a car enthusiast who enjoys racing his car on the weekends